Your Abundance Odometer: How to Speed it Up 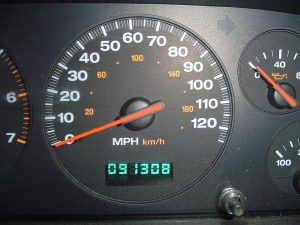 There’s a saying about your net worth being directly related to your self-worth, and I would tend to agree. Of course, that’s not to say that our self-worth isn’t also reflected in our relationships, health, and habits too, because it is. However, our financial limitations seem to be where it shows up for most people.

An analogy I love is that of an odometer. If your income is set at a certain speed, your car (your wealth) won’t be able to putter much past it. The condition of the car is what causes it to go faster, right? So how does your “car” get into its current condition?

Here’s the deal: From the time you were hatched until you were several years old, you were like a little Sponge Bob Square Pants, soaking up whatever the big people in your life told you. In fact, since you were born with a blank slate, it was the opinions of those around you ABOUT YOU that you took for truth. I mean, these were people who could reach the kitchen counter and tie shoe laces with ease, so they must be right. And it wasn’t just them. Maybe a cranky kindergartner kicked you in the head during nap time or a feisty first-grader spit on your finger painting. Anything that sent you a message you might not be as good as everyone else.

The point to glean here is that the way everyone else treated you, and how you INTERPRETED IT, left an indelible impression in your mind of how you’re supposed to be treated. Your interpretation is the story you told yourself about who you were. And depending on the intensity of emotions and future experiences, some of those ideas became cemented in your brain by the way of neural networks being formed. Once neural networks were set, ideas and options became beliefs.

And here you are, all grown up, able to tie your own shoes and everything! But still, something holds you back.

Those beliefs didn’t go away, and they often show up in our finances. So going back to the car, if your odometer is stuck at 50K, good luck getting past it by pushing harder on the gas peddle. You may try to speed up, in the way of forced, frantic action, but that never truly works. Sure, for a few minutes you may hear the engine rev and even see some smoke—but your set point, is your set point. That means that even if your harried efforts land you an extra 20K for the year, you’ll find an unexpectedly big bill from Uncle Sammy. Or maybe you get a really big bonus, but then your transmission goes out.

Blame it on your brain.

The tricky part about your brain is that once a thought becomes a belief, it pretty much goes on autopilot. So even though you “think” you want to earn more, there’s often an unconscious limitation that says it aint gonna happen. Your unconscious conditioning is what holds you back from being a better, bigger version of yourself.

Most people will spend the majority of their time trying to fix the needle on the odometer instead of addressing the condition of the car. That’s like seeing the “check engine” light come on and sticking a smiley-face sticker over it. You’ve got to address the SOURCE of the problem, which is always the conditioning—of both the car and your beliefs.

After more than 25 years as a personal development researcher and hypnotherapist, I am here to tell you that you CAN change your unconscious conditioning. Myself and many of my clients are all the evidence I need. But if that’s not enough proof for you, there’s plenty of scientific studies to back it up. Here are the simple, yet profound ways you can speed up your abundance odometer by changing your beliefs.

Got ‘em? Good, so those are all bullshit. Sorry—don’t shoot the messenger. The truth is, people ARE making a ton of money and enjoying abundance. That doesn’t mean they are greedy, pushy, or evil people.  But let’s not worry about them. This is about you and your self-limiting beliefs. So I want you to take the answers to those three questions and reverse them. Whatever you put, write the opposite of it. For instance, if you answered, “I’m not making more because the economy is bad.” Reverse it: The economy is amazing and there’s plenty of money to be made. Now you’ll make those answers some seriously motivating affirmations. If you don’t know the importance of getting your biology on board, trust me, feeling good has everything to do with manifesting more of whatever you’re looking for.

Ready to hit the road?

For more inspiration and learning the science of manifestation, check out this FREE MASTER CLASS

Hope to see you at the finish line!

RECEIVE UPDATES DIRECTLY TO YOUR EMAIL. SIGN UP NOW.

You have Successfully Subscribed!